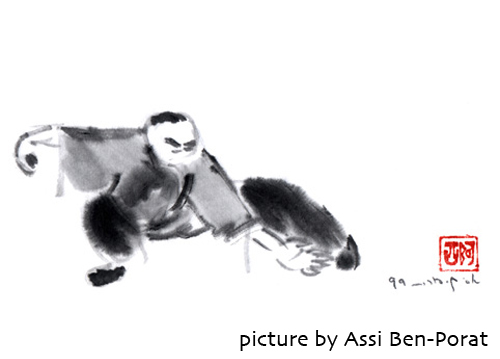 Qigong (Chi Kung) is an ancient Chinese system of body and mind healing through working with energy (Qi/Chi). It combines breathing techniques, gentle body movement and focused intention to strengthen the body, to cleanse it and to support smooth flow of energy and good blood circulating all around.
Qigong is thought to be at least 2,500 years old, but there is evidence that indicates its roots as far back as 5,000 years ago.

The word Qigong is made up of two words; Qi is pronounced chee and means life force or vital-energy (that flows through all things in the universe). Gong is pronounced kung, means accomplishment or skill that is cultivated through practice. Thus, Qigong means Cultivating Life Force. It is a system that is practiced for health maintenance, healing and increasing vitality.

Qigong is looked at, and indeed is being called by some as Nurturing Life (Yang Sheng). Under the term Yang Sheng comes all that contributes to physical, emotional and spiritual balance, not only within ourselves as humans but between ourselves and all that’s around us; plants, animals, nature – the whole universe.

Some people consider Tai Chi as a form of Qigong. Tai Chi works as a whole-body-mind exercise, whereas Qigong, in parts, works more specifically on different systems or parts/organs of the body, such as the digestive system, the respiratory system, kidneys, lungs etc’. But, no doubt that Tai Chi and Qigong are closely related, and most teachers of Tai Chi combine Qigong sequences into their lessons. (It is also important to note that Tai Chi has a Martial Arts aspect to it, amongst others)

Qigong develops both inner and outer body awareness. Through focused attention we become aware of our body and of areas where there might be tension or discomfort. Traditional Chinese Medicine (TCM)  refers to such areas as energetically blocked and out of balance. Through gentle breathing and movement, qi is directed into these places, opening the congested passages. We learn to communicate with our own body by sensing it correctly, listening to its needs and responding to them.

Qigong can contribute to the healing of our emotions as much as its contribution to our physical healing. According to TCM there is no separation between body, heart and mind, which are merely three aspects of the phenomena of being a human being. As such, experiencing fear, anger, sadness, frustration or jealousy, can cause rigidity of body, exhaustion, pain, and eventually disease if unattended. As we gently dissolve physical tension the emotions that were trapped begin to shift, and we can often experience emotional release and are left with a sense of lightness and well-being.

“ When practicing Qigong) We do not need to analyse these states, but to bear witness to their presence in the body, breathing into them, bringing to them a state of balance, gentleness, and grounding “ (Barbara Brown, a certified counsellor and a Qigong teacher)